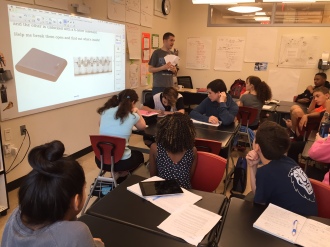 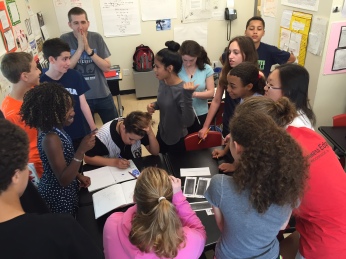 It was so much fun planning a mini BreakdoutEdu game with Matt Guastavino (@MattGusto) and Arana Shapiro (@aranalee) for today’s Algebra class! Pics from our activity are above. Below is the plan (including the clues) that Matt, Arana, and I designed for the lesson. Now the students will spend two days working in groups to make their own games for each other and for next year’s classes.

BreakoutEdu was developed by @JamesTSanders and involves an empty box  (or boxes) secured by a bunch of different locks (combination, letter, directional, and more). From there, teachers design “Escape the Room” type activities and students discover the various solutions to each lock. Many teachers have shared their BreakoutEdu games via their website: http://www.breakoutedu.com and a Facebook group:  https://www.facebook.com/groups/breakoutedu.

Someone brought a BreakoutEdu kit to the NEIT conference at Mohonk in January, but I didn’t really experience a sample game until the Edcamp Organizers Summit in April. James Sanders, Founder of BreakoutEdu, was a keynote and I participated in one of his games. The overarching theme of the game was Communication, and we solved puzzles using Morse Code, hieroglyphics, Incan knots, and other means of conveying information.

I sent an email about BreakoutEdu to the faculty, and both Arana Shapiro (@aranalee) and Matt Guastavino (@MattGusto) responded immediately so we met and collaborated. Arana is one of the founders of The School at Columbia University and launched, collaborated, developed many awesome curricular projects with the faculty. She went on to found other schools including Quest to Learn, the famed game-based public 6-12 school in NYC. Matt is the 8th grade Algebra teacher at The School at Columbia University and enjoys prototyping and innovating. He was super excited to integrate Bootstrap into his curriculum so that his students learn Algebraic concepts while designing a video game – this has become a legacy project.

We had an initial meeting a couple of weeks ago where we established that it would be awesome for Matt’s 8th graders to design games for each other to showcase their learning in Algebra this year. We met again today and realized we should set up a quick game for Matt’s students in order to scaffold the idea of BreakoutEdu (before they are tasked with creating their own games). I wanted the “clues” to integrate as closely as possible with things they’d discussed and learned throughout the year. Arana knew we had to visualize a plan, so she located a large notepad and we started brainstorming… 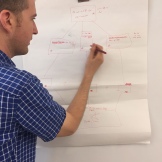 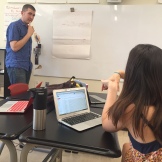 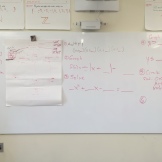 Arana, an amazing instructional and game designer, suggested starting from the final result and working backwards. I knew I wanted students to end up spelling something out on the calculator (as I found this hilarious in middle school), and figured GOOGLE would be a harmless enough word signified by the upside-down number (379009). From there we figured there could be 6 groups, each would have an envelope inside with a number (either 3, 7, 9, 0, 0, or 9) and the following image which would hopefully inspire them to arrange all of the numbers into 379009 for GOOGLE.

So, to get to 3, 7, 9, 0, 0, 9, they have to correctly solve 6 different challenges. This is where we looked over Matt’s extensive list of topics covered throughout the year in Algebra and thought up possible problems – multiplying binomials, graphing functions, solving polynomial equations, graphing inequalities, calculating circumference/area/volume, and finding equations from plotted points.

To launch each problem, we decided to have 6 different groups solve a problem which incorporates a key number based on important events from their integrated curriculum:
1863 = Gettysburg Address
1883 = Atticus’ birth year from To Kill a Mockinbird
1936 = Berlin Summer Olympics (I was excited to find a perfect square for Matt!)
1945 = Little Boy and Fat Man bombs dropped on Japan
1968 = First Special Olympics
1998 = Lion King won a bunch of Tony Awards (this was their 8th grade musical)

We figured students could self-select into these six groups in order to collaborate on one of the problems. In order to gain access to the envelope with the problem, they need to open up a box with a three-digit combination, and the six envelopes will be in the box. In order open the box, they’ll scan a QR code which will take them to John Cage’s 4’33” — this also integrates with their year of study as some students explored John Cage and Music of Chance. Thus 433 could be the combination to the initial box.

Matt is prototyping this project on Tuesday, and Arana and I are psyched to see how it goes!

I learned about Bootstrap (@BootstrapWorld) from Cindy Gao of CSNYC (The New York City Foundation for Computer Science Education). Cindy locates, organizes, and publicizes awesome meetups and workshops for educators around the city. I attend many CSNYC events, and I always try to bring along other educators.

Back at the very start of the the school year, I approached Dr. Sabrina Goldberg (7th Grade Math) and Matthew Guastavino (8th Grade Math) about attending a two-day bootcamp for teachers to integrate Bootstrap into their curriculum so their students could learn math through coding and game design. As stated on Bootstrap’s website, “Unlike most programming classes, Bootstrap uses Algebra as the vehicle for creating images and animations, and is designed from the ground up to be aligned with Common Core standards for Algebra.”

In January, Matt led a Bootstrap unit with his 8th grade Algebra students. They recently shared their games with the community, and Matt told me he and his students really enjoyed the experience. Here’s the game, Lizard Problem, created by Matt’s student, George. I love it when a plan comes together!

Sabrina, Matt, and Cait Bradley (Matt’s student teacher) will be offering a poster session at ISTE in Philadelphia in June. If you’re heading to ISTE, please visit their table and ask them about it:
Game On! Middle School Algebra through Coding and Game Design
Tuesday, June 30 from 10:30 am–12:30 pm.

Bootstrap is a curricular module for students ages 12-16, which teaches algebraic and geometric concepts through computer programming. At the end of the module, students have a completed workbook filled with word problems, notes and math challenges, as well as a videogame of their own design, which they can share with friends and family. Our mission is to use students’ excitement and confidence around gaming to directly apply algebra to create something cool.

Bootstrap also builds in a pedagogical approach to solving Word Problems called theDesign Recipe. Students solve word problems to make a rocket fly (linear equations), respond to keypresses (piecewise functions) or explode when it hits a meteor (distance formula). In fact, this same technique has been successfully used at the university level for decades. 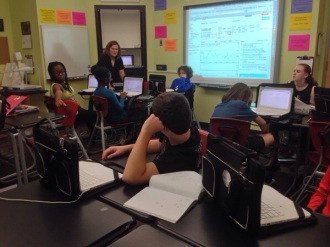 http://google.com/finance
Katie Reimer, 8th grade Algebra teacher at The School at Columbia University, stopped by yesterday to talk about her upcoming mini-unit on stock prices and percent changes. She wanted students to figure out relationships between today’s price, yesterday’s closing price, and price from one year ago today. She asked about ways to assess this, and we decided to use information located via Google Finance and a Google Spreadsheet with formulas to calculate change on day and change over a year. Students chose 10 stocks based on products they use everyday and analyzed their changes. Tomorrow, kids will take the roles of front office and back office to assess each other’s research.

Katie left finance in 2008, and it’s been a pleasure to join her class and learn math with someone who has used it in the real world. I’m pretty sure these 8th grader’s are more financially savvy then me at this point…