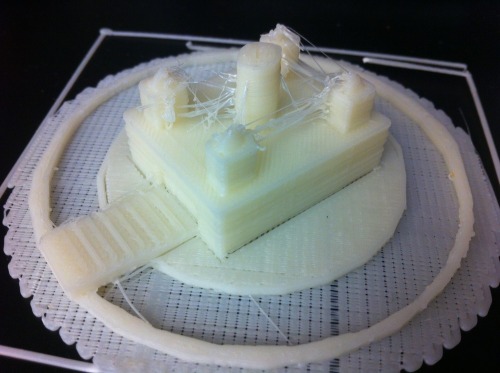 One of the last projects of my year entailed printing out some 3D creations from the 6th grade. Catherine Hildebrandt, 6th grade math teacher, had her students build 3D shapes in Sketchpad and then measure the surface area and the volume. I wrote about her lesson in an earlier post. Next year, we may try to use Tinkercad for this project; They’ve updated their online software to include more robust measuring tools.

Each of Catherine’s three classes chose one design, and I set out to print these using our Makerbot and Bits from Bytes printers. It was a way more arduous and complicated process than I’d expected. Each Sketchpad rendering needed to be exported as an STL file. The first challenge was locating a Sketchpad STL plugin. Once I had an STL file of each shape, I used a different compiler to ultimately send printable code to each printer — ReplicatorG for the Makerbot and Axon for the the Bits From Bytes printer. To speed up the printing time, I lowered the density of each model to like 15% and scaled them down a maximum length/width/height of about 12cm.

STL (STereoLithography) is a file format native to the stereolithography CAD software created by 3D Systems. STL is also known as Standard Tessellation Language. This file format is supported by many other software packages; it is widely used for rapid prototyping and computer-aided manufacturing. STL files describe only the surface geometry of a three dimensional object without any representation of color, texture or other common CAD model attributes. (from the STL Wikipedia entry)