Jeff Tarr (@JeffIsFast) is an inventor/entrepreneur/maker/tinkerer/programmer with a (thankfully) vested interest in sharing his talents and ideas with teachers and students at The School at Columbia University. He approached Ben Raikes (@benedickraikes), 6th grade Science teacher, and me in early October about participating in the Global Space Balloon Challenge to launch a High Altitide Balloon (HAB).

The timing was awesome, as I’d seen a recent message from Laura Blankenship (@lblanken) in which she shared a video and blurb about her students’ participation in the challenge at The Baldwin School:

The Baldwin School partnered with Lancaster Country Day School for the launch of the space balloon and items from a kit Baldwin won in the spring. The kit had items like a GoPro camera, a GPS tracker and a flight computer to gather data like altitude, temperature, pressure and wind speed.

Jeff worked tirelessly (independently and collaboratively) to advocate for the project, organize a plan, propose a budget, program sensors, choose a launch point, and set up a GPS tracker to chart the path of the balloon! People could follow via The SPOT App on an iOS device or via the web using his link and a password!

Other educators were equally excited and supportive of the project including Amy Eguchi who shared the map photo (at the top of this post) with a message explaining that the image “shows how it has travelled. You can see the gap which is when the ballon was above 60,000m. Pretty cool :)”

It was so rewarding to read Ben’s email to faculty which included two awesome still photos from the GoPro camera attached to the frame!

Dear Colleagues,
Yesterday we launched a helium balloon  from Black Rock. It went to 104,000 ft! We have video footage from a GoPro that was strapped onto the rig. Here are a few screen grabs until we can produce a little film..
Best,
Buzz I mean Ben
ps Those pieces are bits of the balloon that has just burst. And that’s our parachute… It landed in a back yard in Williamsburg MA. 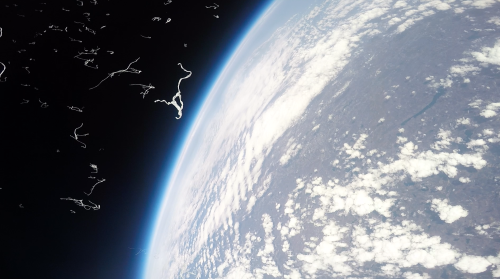 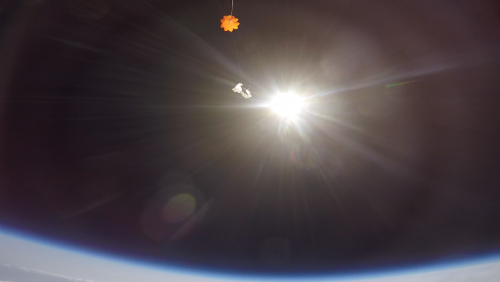 I was kept in the loop throughout the process and, though I missed the actual balloon launch, I cheered from afar. Below are a couple of tweets I saw from the trip to Black Rock Forest on the day of the event: