So thrilled to present #BitsOfMusic with @EmilySticco at #ISTE2016! #MakerEd

@EmilySticco and I are presented a poster session at ISTE2016 (held this year in sunny Denver, CO) entitled, Bits of Music, Lots of STEAM. We shared two projects that we led this past year in #BitsOfMusic, Emily’s 8th grade Music mini-course.

Here are two videos Emily put together that are looping during our poster session:

Thanks, @techlearning! Sneak Peak with @EmilySticco of our #ISTE2016 poster session “Bits of Music”!

Kevin Hogan, Content Director of Tech & Learning, invited me and @EmilySticco to offer a Sneak Peek of our ISTE 2016 poster session Bits of Music, Lots of STEAM. We’ll be sharing two projects that Emily and I led in her 8th grade music mini-course at The School at Columbia University:
1. Cardboard MakeyMakey Jam band
2. Arduino light-up album covers

You can watch our video below. Don’t forget to marvel at the comically bad screen capture. I look like I’m eating a hamburger.

@EmilySticco and I spent the semester integrating Technology into her #BitsOfMusic 8th Grade Music elective. Our first project involved constructing cardboard instruments and making them play music with MakeyMakeys and Scratch. You can see posts about that project here.

Our second project entailed having students compose original music in Garageband. Students then designed and painted an album cover on a 12×12″ canvas and strung it with LEDs in parallel circuits – this required using wire cutters, wire strippers, an awl, and needle nose pliers. Lastly, an Arduino was attached to get the LEDs to light up in patterns that complimented their music.

Each color of LED was connected in an autonomous parallel circuit – I described these as “tracks” – and I asked students to color code their tracks using the same color wire as the LED when possible for the positive leg (the anodes) and black for the grounded leg (the cathodes).

These were inaugural units, and Emily are I are really proud of our plans and our students’ work. We’re hopeful it will be even better next year – for instance, we’d like there to be some sort of microphone or sensor input which recognizes particular pitches causing different color LEDs to light up. That would be awesome…
Here’s a video of my cardboard prototype with three colors of simultaneously looping flashing LEDs:

Here are photos taken while building my cardboard prototype: 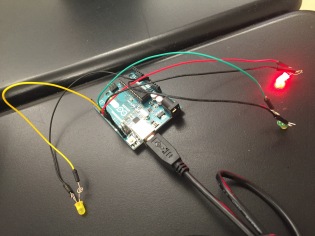 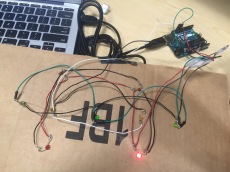 Here is a student’s finished album cover with one color of LEDs:

Here is a student’s finished album cover with two colors of LEDs:

Here are photos of the 8th graders designing and wiring their light-up album covers: 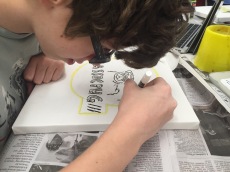 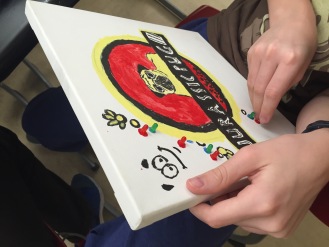 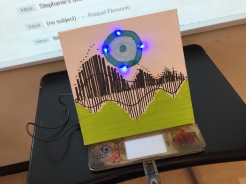 Different Arduino programs or “sketches” were used in this project due to time constraints and the level of difficulty employed by each student’s design. Here are two examples below which students could alter with different numbers in order to blink lights on (HIGH) and off (LOW):

1. This first one has up to three LEDs lighting up one after the other rather than simultaneously using the delay command.

// the loop function runs over and over again forever

2. This second one has up to three LEDs lighting up simultaneously without the delay command. (I found the code in this post here).

/* Blink Multiple LEDs without Delay
* Turns on and off several light emitting diode(LED) connected to a digital pin, without using the delay() function. This means that other code can run at the same time without being interrupted by the LED code.*/

Here are some videos of the MakeyMakey cardboard instruments programmed with @Scratch from the 8th grade #BitsOfMusic mini-course I’m co-teaching with @EmilySticco. Click here for my previous post about the project.