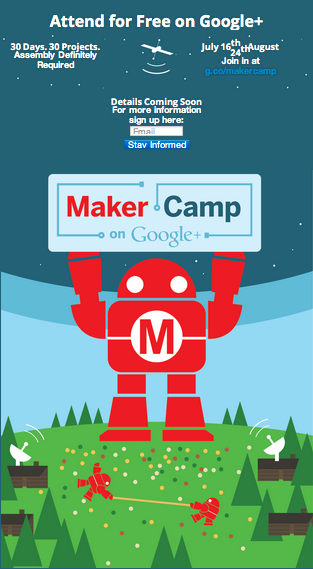 There will be 30 different activities shared over the 6-week program. Anyone can attend for free using their Google+ account.

Adults should register here for a free promotional kit and one issue of MAKE magazine here: http://makercamp-eorg.eventbrite.com/

Teens should register here for the program: http://makercampteenprogram.eventbrite.com/

Details from the registration site below:

How it Works
Maker Camp is a virtual summer camp for teens, with a focus on creating, building, and DIY-ing. It’s free and open to all, and runs from July 16th through August 24th.

Each weekday morning, a new project will be introduced by an expert camp counselor who will walk campers through the steps to build the project. Materials lists will be posted in advance so campers have time to find supplies for the next day’s project.

Each afternoon, campers can join the camp counselor in a Hangout on Google+ to talk about the project and look at photos campers have submitted.

And tune in every Friday, when we’ll be taking campers on epic “field trips” via a G+ Hangout!

How to Join In
Maker Camp is all about interactivity and participation! Be ready for the first day of Maker Camp by building your profile on G+ today and adding MAKE to your circles. Once you’re on G+, you can interact with friends and other campers and follow along with Maker Camp’s daily projects. Then show off your creations with photos and videos!

If you have any questions at all, please contact Meg Mason at mmason@makezine.com

Jay Heath (@heathjw), a Technical Support Specialist at Ethical Culture Fieldston School, sent a message to the NYCIST listserv about teaching teens to navigate online privacy settings. He was seeking more resources, beyond the following sites:

The responses to his query were super informative and worth sharing so I gathered them below.

Karyn also shared the following articles that she discusses with her high school students:

Arvind Grover (@arvind) is currently the Director of Technology at The Hewitt School and will be an amazing administrator at Grace Church School next year. Arvind said he uses Mashable’s guide to Facebook privacy with his students.

Pat Hough (@PatHough) is the Lower School Technology Coordinator at Columbia Grammar and Preparatory School. She shared a link to Danah Boyd‘s (@zephoria) keynote from the Theorizing the Web conference last month: http://thesocietypages.org/cyborgology/2011/04/11/audio-from-danah-boyds-ttw2011-keynote/

As per my last post, I just finished a Renaissance Photoshop art project with 6th graders where we located digital images of Renaissance paintings from ARTstor‘s online digital gallery and then used Photoshop to layer themselves into the painting. During the course of the 3-day project, we had discussions about copyright, fair use, and public domain. We talked about how the Mona Lisa and all the other works we were altering are in the public domain, and our contributions to the original paintings were copyrightable.

I said that there were two possible hiccups preventing us from going forth and copyrighting our art: Our digital images of the paintings came from http://ARTstor.org, and the hardware/software we used is owned by Columbia University. Because I hate being ignorant and I love being right, I contacted ARTstor to find out if we could convince ourselves that we owned our altered image. I spoke to Cassy Juhl, a User Services Associate, who conferred with ARTstor’s lawyers and emailed me a few days later. Essentially, we can access/view/use images from ARTstor for academic and non-commercial purposes because Columbia University subscribes to their service. However, since ARTstor does not own the images in their digital collection, they can’t authorize manipulation of the files. I reminded the kids that ignorance is a terrible excuse for doing something unethical; Since we now know that we can’t use ARTstor’s images for this project, we cannot further ignore and abuse their Terms and Conditions of Use.

So, my latest idea is to generate our own collection of digital images of works of art at The School at Columbia University. Tons of museums allow no-flash photography, so I (or my students) can just gather our own photos of public domain art that we can then freely alter. As per the Mona Lisa, I’ll either have to elbow through the throngs of tourists at The Louvre this summer to take the best possible photo of her or establish a contact that can offer us a fair use copy.

Below is Cassy’s response that I shared with my 6th graders:

Dear Karen,
Thank you for your phone call.  After looking into your question regarding ownership of an altered image and I have a response for you. The ARTstor Terms and Conditions of Use ( http://www.artstor.org/our-organization/o-pdf/terms-conditions.pdf ) prohibit the modification of ARTstor images.
Specifically, see Section 6:

Who are the people in your [online] neighborhood? After TEDActive, @kristinalford is one of them. 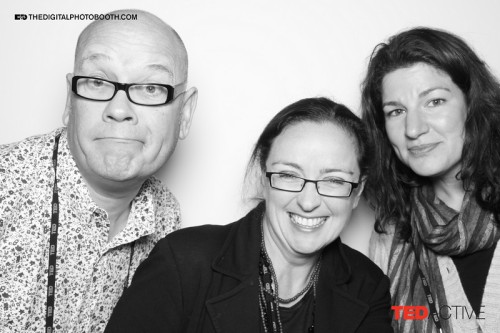 While I engaged with a variety of smart, interesting, motivated, and passionate people at TEDActive, the first person I met was Kristin Alford (@kristinalford). After a sleepless night and a long trans-continental flight, I blearily arrived at the Riviera in Palm Springs, checked into the hotel on Foursqare (I could not check-in physically as my room wasn’t ready), and was delighted that the app yielded a half-price Shiraz at the Sidebar Lounge!

I am genetically inclined towards bargain shopping and talking to strangers, so I immediately told the nearest person about the wine deal. Kristin, too, was waiting for her room to be ready, so we made quick work of introducing ourselves, deciding that wine was indeed in order, and situating ourselves at the Sidebar.

We had a delightful couple of hours (and glasses) together, and it was a pleasure to meetup throughout our time together at TEDActive. Kristin described herself as futurist; She is the Founder and Managing Director of Bridge8, which is “a foresight, industry development and science communications consultancy based in Australia.” (I was slightly disappointed that being a futurist didn’t mean psychic powers and the ability to predict lottery numbers…)

Kristin was also the lead of the TEDActiveSOC action project. Here are some excerpts from her blog post describing the project:

Last week, I had the privilege of attending TEDActive, the livestreamed sister of conference of TED. Amidst the talks, the conversations and the workshops for TEDx organisers, I participated in one of the TEDActive projects – Social Networks (or #TEDActiveSOC). The purpose of our project was explore how we might use our social networks to turn inspiration into action.

As the discussion unfolds, we realise we have surfaced a number of questions to explore with the wider TEDActive audience. These questions are:

Rather than proposing a specific micro action, we are proposing a new micro philosophy. Know the power of the people in your network, know the way to reach them, and know to ask them to act in a way that matters. Whether it’s showing support for the middle east, participating in JR’s global art project, or spreading TEDED we’re asking you to be deliberate in your social networks. When you share your ideas from this week, we’re asking you to be the signal, not the noise.

Kristin talked about embracing “not micro-actions but a micro-philosophy,” and she quotes Amanda Rose’s interview on TEDActiveSOC in the Huffington Post:

Finally, I love Kristin’s last paragraph: The outcome of the TEDActiveSOC project is to ask you take on this micro-philosophy of using your networks more deliberately to create change that matters.

That is an idea worth spreading, for sure.