Here are photos and videos from yesterday’s @RoboExpoNYC. I love our annual celebration of creativity, ingenuity, perseverance, engineering, coding, and robots! #MakerEd #STEAM

Thank you to Hewitt School for hosting this year’s 14th annual Robo Expo yesterday! Many thanks to Erik Nauman and Jeremy Sambuca of Hewitt School, Hope Chafiian of Spence School, Michael Tempel of Logo Foundation, Lan Heng of Ethical Culture Fieldston School, Francesca Zammarano and Javier Alvez of United Nations International School, and Jane Moore (and me) for organizing again. Our event is a celebration of robotics, engineering, programming, physical computing, creativity, ingenuity, and perseverance. It’s a low-key, kid friendly, family-friendly, and age-appropriate afternoon, and I’m fiercely proud to be a part of the founding team since our first Robo Expo in 2005. 🙂

After completing a challenge, participants get robot stickers! This year’s challenges included:

You can view our tweets at @RoboExpoNYC. Here are images and videos below:

Along with a handful of awesome educators, I’ve been a proud co-founder and co-organizer of the annual RoboExpo for over a decade. A bunch of us had been to the FIRST LEGO League competitions, and while they are amazing and important events, we yearned for something more low key and kid-friendly. At RoboExpo, students celebrate robotics and programming, share their awesome projects, and participate in a few light challenges for sticker prizes.

Here is a photo album from this year’s 11th annual event: http://robo-expo.org/photos2016/

Also, check out the segment below about this year’s event which was broadcast on Eagle News in the Philippines!

A few images from the 9th annual @RoboExpo

Today was the 9th annual Robo Expo (@RoboExpo)! The afternoon is a kid-friendly, low-key, age-appropriate event which is split into two parts: an exhibition where children from a variety of schools showcase their original designs, programs, and machines, and the challenges where students demonstrate that their robot can follow a line, gather cans, and stay on a table using sensors, attachments, and specially-written programs. The challenges change from year to year, and the prizes are robot-themed stickers. The past two years also included a table where kids could construct and take home brush bots!

This year, a NAO robot was a special surprise guest brought by Ryan Meehan of Teq (@TeqPD). Nao played games, responded to verbal and programmed instructions, and wow-ed the audience by dancing to Thriller and Gangnam Style. The robot was a little slow to respond at first, so I quipped that instead of NAO (pronounced “now”), we should call him LATER. Drumroll…crash!

We hadn’t even cleared up the last of the Legos and wires and mats before starting to plan for next year’s 10th running of the robots. While I uploaded a set of images to Flickr, I included some shots from my phone below: 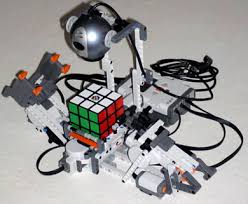 Greg Benedis-Grab (@gbenedisgrab) stopped by just now and asked if I knew where to find ideas for robotics projects. I haven’t taught Robotics or Programming in a few years, so I googled NXT project ideas and similar search words. He and I spent a few minutes examining the results, and we liked the following resources: